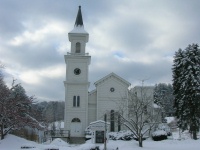 West Brattleboro is a village of 4,000 people within the Town of Brattleboro, Vermont. West Brattleboro was originally an agricultural community that has changed to a rural service based economy. This change has created a dichotomy of land uses between a traditional compact, mixed-use village and low density commercial buildings built on farm fields. The businesses along its main thoroughfare (VT 9) are a random mix of retail, convenience stores, gas stations and restaurants. The West Brattleboro Master Plan is the village’s first attempt to prevent suburban sprawl and to create a cohesive vision for the community’s future. An Asset Based Community Development approach was used to identify the village’s greatest physical, natural, and social assets. The Plan had an extensive public participation process that included a visual aesthetic survey, an identification of assets, a community design workshop, a photo essay, focus groups and several other public meetings. Over 250 people were involved which amounted to one of Brattleboro’s most extensive public involvement processes. Community volunteers provided services and local businesses provided sponsorship which made the process highly inclusive. Final products included an 80 page full color report, three growth scenarios, a real estate market analysis, architectural renderings of a new mixed-used commercial center and a village common, and a future land use map.